Over 140 cuppers, 20 teams, 4 coffees to blend, 500+ cupping bowls - just another year at Roasters Guild Retreat. We're back with heads full of coffee knowledge, bags full of new friends, coffee and sponsors swag and . . . a complete summary of this year's roasting competition!

Cropster learned a lot from sponsoring this years competition. We were asked to collect the tasting datafrom all 20 participating teams, and with Cropster Cup and Lab already well established, we were up for the challenge and happy to take part!

In this post we will recount the rules and processes followed to make sure that the cupping went through without complications, reveal the scores and winners in each tasting along with what they did to get their top spot in the competition, and finally reflect on the event and what we might learn from the data.

This years competition was titled You be the Judge. Which meant that after each team was given their opportunity to create a three component blend on their assigned machine, everyone would be collectively scoring the coffee together across two tastings.

Competitors were given four coffees to choose from (sponsored by Atlas Coffee). Each team had to decide which blend of the Kenyan, Guatemalan, Burundi, and Myanmar coffees would cup the best and brew the best in a Curtis brewer. They were not required to submit the same coffee for both sessions, though many teams did.

After submission, each coffee was placed into a Cropster cupping session which was evaluated by 5 separate teams within the room. They were given a random order with 5 coffees per session and 4 sessions per tasting.

For both tastings, the coffees were in the same order but tasted by different individuals. Each coffee was given a letter and a session number. This helped coordinators make sure that the correct coffee was in the right spot each time. Each tasting required over 500 cupping bowls and that each coffee was in the perfect place for proper data collection.

The coffees were given a random order prior to Roasters Guild retreat. Though not all teams cupped their own coffee in the blind tastings, competitors may now see if they cupped their own coffee using this chart since the same order of coffees was used for each tasting. Session numbers are on the right, labels are above and samples were numbered by team number.

For Example: Team 12 was Sample A in Session 1 for each tasting

There were two tastings at retreat. The first was a brewed analysis using the World Brewers Cup Form. The second was a cupping using the SCAA cupping form. In order to win, the competitors would need to have the highest combined score for both tastings.

After all the data was collected, we had approximately  140 people cupping using Cropster Cup each time we did a tasting.

In an effort to keep the scoring fair for the competition, some data cleaning was required. Scores that were left completely empty were filtered out and those that were missing one or two category scores were given a similar score to those at their table. No data was deleted in this process-instead using Cropsters interface we were able to simply not take these scores into account. This feature is very helpful when training new cuppers who you would like to take part in sessions despite inexperience and sometimes unreliable cupping abilities.

First off was the brewed session! For this session, 240 grams of coffee were ground at a 17 setting, at a 1 to 16 ratio in a Curtis Gold Cup brewer. Coffees were all distributed to the correct table by volunteers and then tasted using the WBC form. Here are the results for that session:

To see each teams individual scores, comments and descriptors, click here (and zoom in ;-))

** At retreat Emilio Lopez read out the scores for who won the cupping session before revealing who won overall. While he had the correct scores for each team in front of him, they were organized by who won overall not by who won the cupping. We believe he may have read the wrong team for second and third place. If you look at the chart with the overall winners below you can get an idea of how this happened. **

Next was the cupping session! It was set up in classic SCAA format with 5 cups per sample, each weighing 12 grams. Competitors then cupped the coffee and entered scores using our optimized SCAA form for the Cropster Cup app. Shockingly, the coffees scored differently when judged by different people, with a different evaluation form. Here are the results:

To see each teams individual scores, comments and descriptors, click here (and zoom in ;-))

And the Winner is...

With the scores compiled from both tastings, all we needed to do was pair up both scores for each team. To do this, we exported the final scores in spreadsheet format and added the scores together using google sheets. 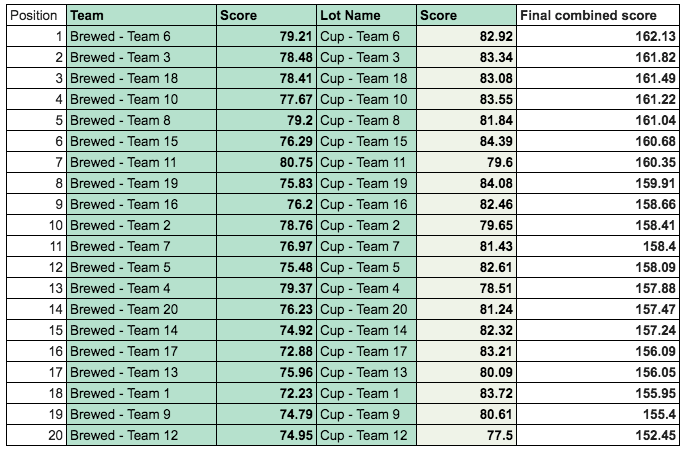 Exporting from Cropster is easy, so we just added the scores together in google sheets

When asked how they won, one of the team members replied:

"I think the chemistry we established early on with each other really set the tone for the challenge. Everyone, no matter their experience was involved and we all had a great time and worked together really well. Lasting friendships were definitely formed. As far as the coffees go, we did not use the Myanmar at all and used equal parts of the rest for the first tasting. We really liked the way the three worked together and the characteristics that were brought out when blended. No pre-blending was done."

Congratulations to The Drum Rollers and all of the participants at Roasters Guild Retreat this year! This is one of the most unique cuppings to take place and we are so happy to have played a role in the competition. Thank you for being our customers and for letting us sponsor your events.

If you have any questions you would like to ask about the competition and our processes please feel free to comment below. All the data information we have to share is included in this post.