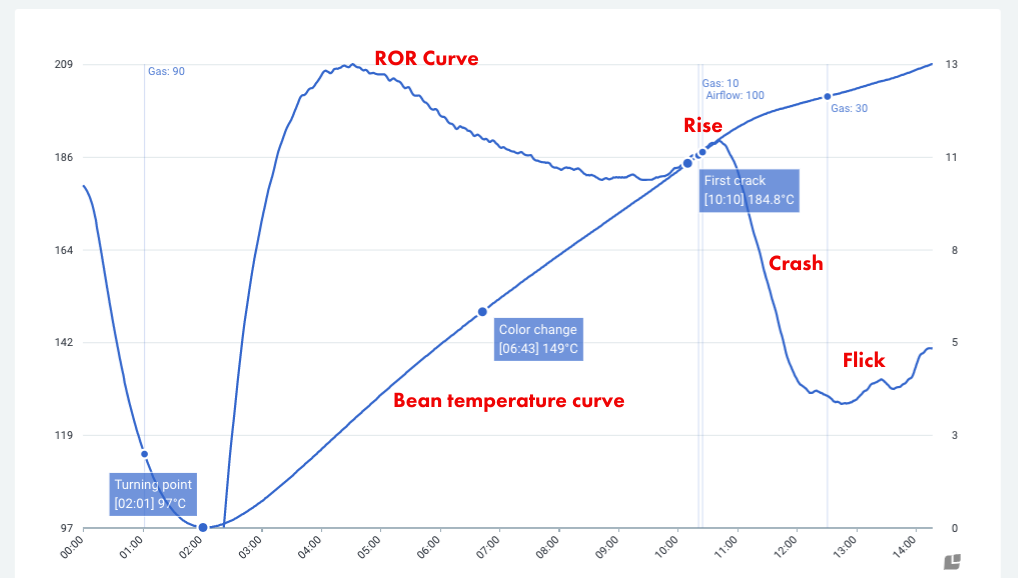 The majority of my clients ROR curves have looked like this before I began working with them. Such curves are so common that I've begun thinking of them as “unmanaged” or “natural” curves.

Compared to similar roasts with smoothly declining RORs, such unmanaged roasts will offer less delicacy and sweetness, and may taste baked. They will often have a hint of char, even at a light roast color.

The flick at the end of the roast causes the charred flavor and loss of delicacy. The flick indicates an acceleration in the bean ROR. Several factors may contribute to a flick, including a crash in the ROR early in first crack, reduction in the release of moisture toward the end of first crack, and overheating of the roasting environment. The most damaging potential cause is an increase in the roasting drum’s surface temperature, if for instance, the operator increases the gas during first crack in a classic-drum roaster. Like the searing of a steak, the hot drum surface will darken only the outermost layers of the beans, contributing to an uneven roast. The beans may not look burnt, but a roast with a flick will usually taste more roasted and less delicate than a similar roast without a flick.

I have measured the color distribution of several ground-coffee samples from similar roasts that differed primarily in whether they flicked at the end. The flicked roasts usually produced a greater volume of grounds at the darkest color, with little other difference in the color distributions.

Please do not underestimate the damage imparted by a flick. Many roasters who seem to think the flick is benign have posted flicked ROR curves online, claiming that the curves followed my system (i.e., had a constantly declining ROR), but, of course, a flick indicates a rising ROR and a violation of the system. I often wonder if some roasters have been flicking for so long that they think it’s inevitable.

The flick may also mislead roasters in their understanding of how development time ratio (DTR) affects coffee flavor. Many roasters have told me that higher DTRs (i.e. 20% - 25%) produce roasty flavors (relative to bean color). But there is, in fact, a modest correlation between DTR and roastiness; every time one of those roasters showed me their ROR curves from the high-DTR roasts, their RORs contained flicks. The flicks, I believe, not the high DTRs, were the causes of the roasted flavors. All of the roasters who were open-minded enough to accept a range of DTRs while learning to smooth their RORs eventually found the roasted notes disappeared and their coffee was sweeter than it had been before.

In a typical 10-14 minute drum roast, the flick usually occurs between 16%--17% DTR (when first crack is marked using my “ETROR trick.”) Those who drop batches early in first crack rarely have to contend with flicking. However, when roasting darker, one must manage the flick and, if roasting dark enough, a likely crash after the flick.

Cropster offers several features one can use to monitor and avoid flicking the most recent one being AI based Flick prediction. Here are some additional ways roasters can avoid a Flick:

Users should use the fastest setting that their probe allows. Begin with the sensitive setting and increase it if needed. You can read more about Cropster’s three rate-of-rise settings here. One can, of course, instead view the real-time ROR number on the far right of the screen, but I find it helps to also have the curves’ values closer to the real-time readings.

I recommend roasters ensure their bean probes do not have too much thermometric lag. Typically, smaller-diameter probes read more quickly, with less lag. I recommend against using ungrounded thermocouples with diameters larger than 3mm.

Roasters should monitor the environmental-temperature ROR (ET ROR) curve as well. When the ET ROR begins to climb too high, too fast, it may be an early-warning signal that the bean ROR is about to rise, or at least slow its descent. An exception to this is just after first crack begins. 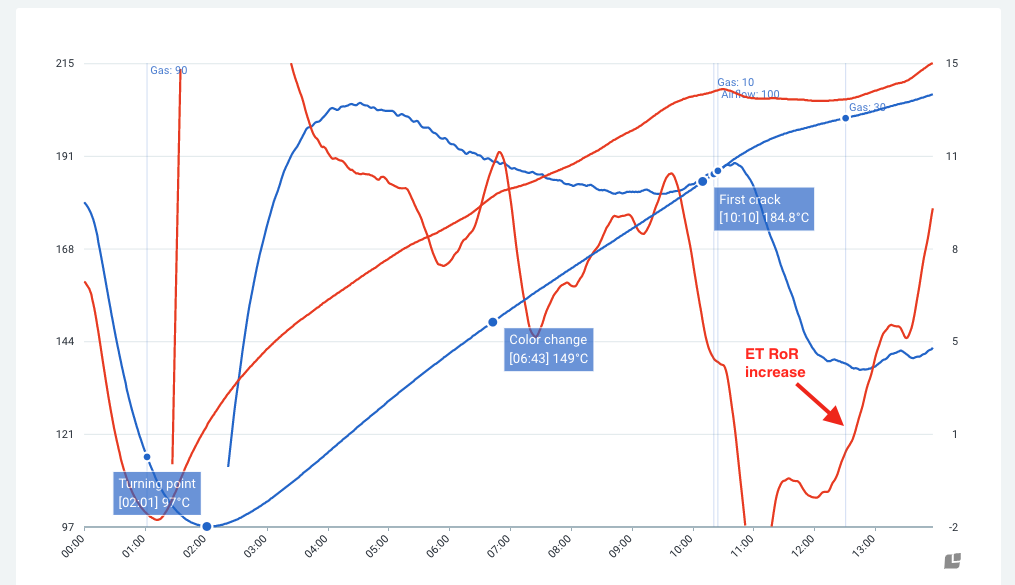 Scott Rao is a coffee consultant and author most recently of the book Coffee Roasting: Best Practices. You can follow Scott on Instagram @whereisscottrao for frequent roasting and brewing tips and discussion.